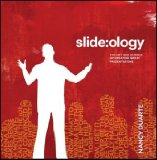 Slideology: The Art and Science of Creating Great Presentations

We are all inherently visual communicators.Â  Consider kindergarten: crayons, finger paints, and clay propelled our expression, not word processors or spreadsheets.

…audiences will either listen to what a presenter is saying or read the slides themselves.Â  They won’t do both.Â  Why? People tend to focus on one stream of verbal communication at a time – listening and reading are conflicting activities.

Parameters for an hour long presentation with 30 slides

6-20 hours: Research and collect input from the web, colleagues, and the industry.
1 hour: Build an audience-needs map.
2 hours: Generate ideas via sticky notes.
1 hour: Organize the ideas.
1 hour: Have colleagues critique or collaborate around the impact the ideas will have on audience.
2 hours: Sketch a structure and/or a storyboard.
20-60 hours: Build the slides in a presentation application.
3 hours: Rehearse, rehearse, rehearse (in the shower, on the treadmill, or during the commute)

What are they like?
Why are they here?
What keeps them up at night?
How can you solve their problem?
What do you want them to do?
How might they resist?
What’s the best way to reach them?

Change your environment when you need to be creative.Â  Find a spot away from your desk.

Data slides are not really about the data.Â  They are about the meaning of the data.

Bar charts are visually more precise than pie charts, and can accommodate larger data sets.Â  Plus, you can stack them to add an additional set of data.Â  Use them when you need to show precise relationships.

No matter the software being used, there are a wealth of buttons, bullets, lines, ticks, gradients, borders, fills, and other chart decorations that can quickly overwhelm the data on a slide.Â  Edward Tufte, author of The Cognitive Style of Powerpoint, refers to these as “chartjunk” or “PowerPoint Phulff.”

Put identifiers in the graph itself, instead of including a legend when you can.

Simplify the legend by removing the border, reducing the font size, and visually separating the primary information from the secondary information.

De-emphasize the background grid by lightening the color.

Tilted pie charts tend to give more prominence to the data in the foreground.

Don’t use depth (3D) when it serves no purpose.

Using too many bold colors obscures the focal point.

Illustrate Statistics: People’s retention of data increases when they can “see the numbers.”Â  Various icons bring the information to life.

Employ Actual Photos: Stock imagery often fails because it lacks content.Â  Real photos may not always be easy to look at, but they possess credibility and import that staged images do not.

“People have a hard time coping with excessive cognitive strain.Â  There is simply a limit to a person’s ability to process new information efficiently and effectively.Â  Understanding can be hard enough without the excessive and nonessential bombardment by our visuals that are supposed to be playing a supportive role.” -Garr Reynolds, Presentation Zen

“…the idea is to use just notable differences, visual elements that make a clear difference but no more – contrasts that are definitive, effective and minimal.” – Edward Tufte 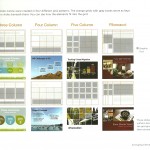 Adobe’s presentations rely on an underlying 5×5 grid to determine the placement of text, imagery, and objects.Â  Though the shapes and sizes of elements vary, the regularity of layouts produces a sense of structure and solidity.Â  Additionally, leaving the top and bottom channels empty creates a more cinematic feeling while providing space for titles and similar information.

A Zen garden is a lesson in simplicity.Â  Open space without ornamentation, a few rocks carefully selected and placed, raked gravel.Â  Beautiful.Â  Simple.Â  The Zen garden is very different from gardens in the West that are absolutely filled with beauty, so much beauty, in fact, that we miss much of it.Â  Presentations are a bit like this.Â  Sometimes, we’re presented with so much visual and auditory stimulation in such a short time that we end up understanding very little and remembering even less.” -Garr Reynolds, Presentation Zen

Ingredients of a Great Slide

Monochromatic – Using variations of the same color can create a striking palette, but it’s difficult to use color effectively without adding black, white, and shades of gray for contrast.Â  Select colors with a broad range of tints and shades to provide enough contrast.

Analogous – Selecting colors that are touching in the wheel creates a narrow, harmonious color scheme.Â  Similar to monochromatic colors, analogous colors provide a predominantly warm or cool feeling, depending on where thy lie on the wheel.

Complementary – Colors from the opposite ends of the wheel provide the most contrast.Â  If you can stave off the temptation to add more colors, limit them to only two to create a powerful (or even startling) look.Â  But arrange them wisely so they don’t clash.

Triadic – Three colors equally spaced around the color wheel create vivid visual interest.Â  Some of the palettes are bold while others are more refined.Â  You can modify this method by using a light tint or dark shade of one of the three colors instead of the pure hue.

Tetradic – This scheme is popular because it offers strong visual contrast while retaining harmony.Â  It uses two pairs of complementary colors.Â  It’s difficult to harmonize this scheme if all four hues are used in equal amounts.Â  Pick a dominant color for your design and use the others to support the main one. 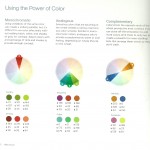 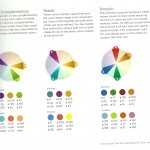 Designers use an “eyedropper” tool, to select colors from an industry representative photo.Â  They then use those colors as their palette.

To assemble a palette, ideally select three to five core colors from the color wheel, plus a neutral and a highlight color.Â  A good place to start is to look at the color(s) of your logo and industry-appropriate colors.

Selecting colors form one side of the color wheel ensured contrast and color harmony. 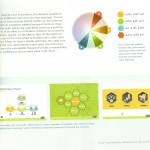 Serifs – intended for a long sequence of words that exceed one line.Â  They have little feet that guide the letters into each other so the letters appear connected, and to help the eye stay within the line of text in dense copy.Â  Serifs possess varying line weights that help the eye identify the letter quickly.

Sans Serifs – means without serifs.Â  The letterforms are bigger and bolder.

Instead of doing a “bullet striptease,” consider graying out the secondary text, and highlight the text you want the audience to focus on.

Ligatures – occur when two or more letterforms are joined as a single glyph.The most common English combinations usually begin with the letter “f.”Â  Common ligatures are “fl, fi,ft,ff,ffl,ffi.”

Kerning – adjusts the space between individual letters.Â  A well-kerned font reduces the amount of visually awkward gaps between letters.Â  Turn auto-kerning on in your presentation software.Â  Common letters that need to be kerned manually are capital letters: “A, R, T, V, W Y.”

In typesetting terms, a widow is a single word by itself at the end of a paragraph.

Put your file into slide sorter view.Â  Look at the slides at 66 percent size.Â  If you can still read them, so can your audience.

Follow the advice of Guy Kawasaki, author and former Apple Fellow: “A good rule of thumb for font size is to divide the oldest investor’s age by two, and use that font size.”

If you are consistently reducing your point size to under 24 pt and using their-level bullets, you have officially created a document and not a slide.

The Rule of Thirds

The rule is applied by dividing your photo into thirds both vertically and horizontally.Â  Don’t be afraid to re-compose an existing shot so that key features fall at power points for maximum impact.

Use isometric images – they have no vanishing point, which makes all the sides of the illustrations parallel to the opposite side.Â  …they will all appear to be sitting on the same surface no matter where you put them.

Since its inception, Cisco has given away its art library.Â  The company wanted its own representation of a network to be the industry standard.

Presentations are almost the only time-based media that professionals use on a daily basis.Â  It’s tempting to make everything buzz like a fly or swoosh like a rocket.Â  Don’t do it.

The eye is comfortable moving left to right because it mimics reading.Â  The eye is less experienced moving the opposite direction and thus less comfortable.Â  In the movies there’s a chance that the “good guy” will enter from the left every time.Â  Conversely, the antagonist usually enters form the right.Â  This subtle irritant directs audiences to see the character negatively.

Using the push transition in PowerPoint can create the illusion that the camera is panning.

When more than one person generates presentations for an organization, a well-built template system is a must.

Always remember, employees are ambassadors of the brand.Â  Their interactions with the industry, clients, and shareholders keep the brand perpetually visible.Â  Arming them with the right tools helps tell a cohesive visual story and also streamlines their presentation development process.

TED (Technology, Entertainment, Design), an annual conference in California featuring some of the greatest thought leaders and innovators in the world, helps spread ideas and shape our culture and future.

When in slide show mode, press the B key to turn your screen to black so that focus is on the speaker.Â  Alternatively, press the W key for an all white slide.

As a venture capitalist, Guy Kawasaki has to listen to hundreds of entrepreneurs pitch their companies.Â  Most of the pitches are crap: sixty slides about a “patent pending,” “first mover advantage,” and “all we have to do is get one percent of the people in China to buy our product.”Â Â  So he came up with the 10/20/30 rule for PowerPoint.Â  It’s quite simple: a PowerPoint presentation should have 10 slides, last no more than 20 minutes, and contain no font smaller than 30 points.Â  He believes that this rule applies to presentations when the audience needs to reach consensus.

Kawasaki says that 10 slides is the optimal number of slides because a normal human begin cannot comprehend more than 10 concepts in a meeting – and venture capitalists are very normal.Â  If you must use more than 10 slides to explain your business, you probably don’t have a business.

Lessig Method of presenting – fast-paced delivery style with an enormous amount of slides.Â  Each slide has one big idea on it.

Garr Reynolds created a presentation called “Career Advice,” based on Dan Pink’s book Johnny Bunko.Â  The 184 slides that Reynolds posted on SlideShare take about 6 minutes to read.Â  It’s like a quick-paced little book that you can review at your own speed.

The Golden Rule – Never deliver a presentation you wouldn’t want to sit through.

2 thoughts on “Raw Notes: Slideology: The Art and Science of Creating Great Presentations”