As I’ve mentioned in earlier posts, I recently made the switch from Microsoft Money to Quicken 2010 Deluxe.Â  While I had expected to go through a personal finance armageddon, it turned out to be a much smoother experience than I originally thought.Â  It really wasn’t as bad as you may have read about in the Amazon reviews or the Intuit blogs.Â  However, there are still a number of things that I miss about Microsoft Money.Â  (I never thought I would say that)

Below are three quick and powerful tips that will make Quicken 2010 Deluxe act more like Microsoft Money.Â  While they don’t compensate for all the missing Money features, these tips will definitely make your transition to Quicken smoother.

1.Â  Switch to a One Line Register View

If you’ve used MS Money for years, one of the first quirks you’ll have when you open Quicken is looking at your account registers in a two-line view.Â  While this may be great for an accountant who uses a manual ledger, I actually preferred the simpler one line view that Money had.Â  The second line really serves no purpose, other than to take up screen space.

To change to a one line view, simply go into any one of your accounts, and look for the Account Actions drop down menu.Â  Click it, then scroll down and uncheck the option for Two-line display. 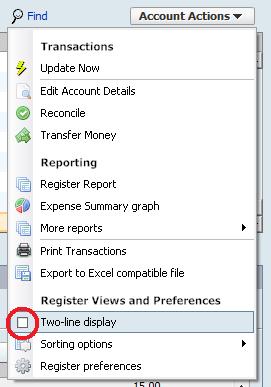 This is probably the most important adjustment in making Quicken more like Money.Â  With the standard Money import handler, I had to confirm every transaction before it entered my ledger.Â  While annoying at times, it forced me to confirm every credit card charge and has actually helped me spot a number of errors in my bill.

This becomes even more important with Quicken, as the standard financial data import goes straight into your accounts, no confirmation needed.Â  If you have an offline transaction that, for some reason, isn’t matched to the same transaction from an online source, Quicken will simply duplicate the transaction.Â  If you happen to be doing a massive account update, this can be a real pain, as distinguishing between entered and downloaded transactions is not intuitive in Quicken.

To change to manual confirmation of downloaded transactions, click on the Edit menu at the very top of the program and scroll down to Preferences.Â  Then Click Quicken Preferences.

In the Quicken Preferences window, click on Downloaded Transactions and then uncheck the box for “Automatically add downloaded transactions to the register.” 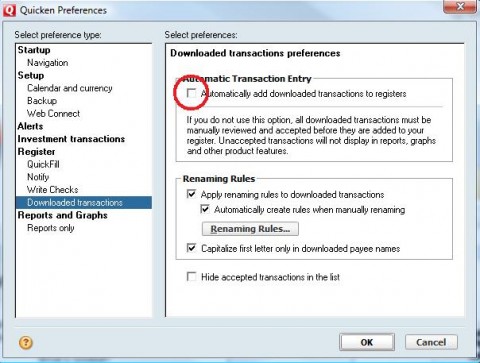 This is a small gripe, but the standard view of your accounts rounds the overall values to whole dollars.Â  This is strange considering this software was built by accountants and bean counters.Â  The whole point I have financial management software is to tie my accounts to the penny.Â  Anyone who’s worked in accounting knows that even an error of a few cents, if left uncorrected, can lead to hours of backtracking and rework.

To switch to a “cent” view, right click the account summary on the left hand side of program.Â  Then from the right click menu, check the line for “Show cents in amounts.”