The moment I created an iTunes account, I knew it had the potential to burn a hole through my wallet. With the iPhone and iTunes, apps can be downloaded simply with a handful of presses on your screen. This presents a very fundamental personal finance question to all the frugal savers out there:

How do I get quality apps on my iPhone without wasting my time downloading crappy apps and losing a ton of money in the process?

To answer this question, there are four key things you need to know about the app market:

1. The app market is completely saturated

It’s been a while since I’ve tread upon a college campus, but it seems that everyone and their cousin are developing iPhone apps. To take advantage of this, all you need is patience and the resolve to know that there are plenty of “apps” in the sea.

I can tell you from personal experience that most times I’ve paid for an app, I’ve been severely disappointed. The problem with having such an open development environment is that you inevitably get a deluge of garbage from wannabe developers. While Apple does a good job of preventing viruses and inappropriate content from reaching their app store, they do nothing to remove apps that are contrived, lazy brand extensions, and an outright waste of money.

3. The free apps filter on iTunes is insufficient

This list usually represents some big name developer pushing a “Lite” version of their app, that they expect you to eventually pay for. While some of these are decent apps, the quality is often erratic and usually not worth your time.

4. Most apps need to drop in price to penetrate the market

If you find a really cool paid app online, there’s a strong likelihood that a comparable version exists for free, or will appear on the market soon. Sure I want to support developers. But at the same time, why would I buy a newspaper when I can just read the news online for free? Why would I pay for an app if I know I can eventually get it for free?

All of these points leads us to the answer of our aforementioned question:

By using price drop sites, we filter out the crappy apps that have been free forever. If you track these sites, you get to download your apps for free while other consumers end up paying the developers. And at the end of the day, if the app sucks, guess what? You’re out $0.00.Â  My favorite Free App / Price Drop Sites are: 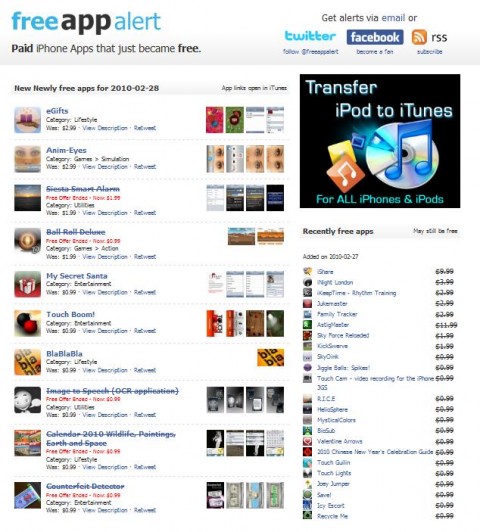 The best designed price drop site I’ve seen and the one I check most regularly. Free App Alert.com shows you a query of all paid iPhone apps that recently became free. Next to each result are screenshots of the app in question. One feature I love about this site is that, rather than making you click through each app link to see the images, you can just move your mouse over the thumbnail to see an enlarged image. Very useful during one of my free app download binges. The site does an amazing job of updating you on price changes to apps and letting you know which apps on their site are still free to download. This should definitely be your first destination when browsing for apps.

Free Game of the Day 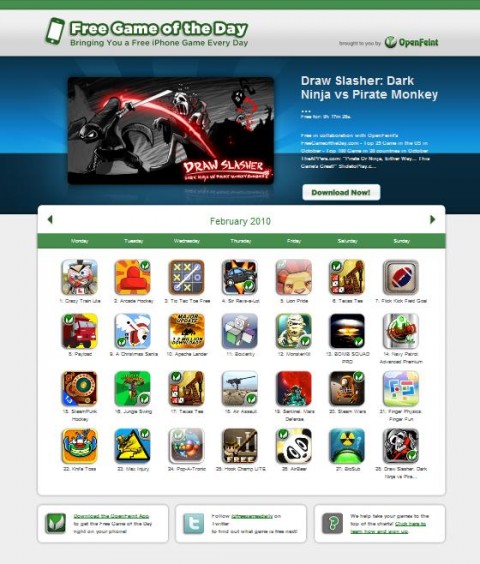 This site is based around OpenFeint and only has games that are compatible with the OpenFeint tracking system. Admittedly, most apps that I have on my phone are now games, so I’m a bit partial to sites like this. Of all the sites I visit, I believe OpenFeint provides the highest level of quality when it comes to their free apps. It doesn’t happen often to someone as cheap as me, but there are times I’ll be playing a downloaded game from this site and asking myself, “I got this for free?” OpenFient’s main interface provides a calendar of free apps by day and links directly to the iTunes store.

A promotion based site that offers a free iPhone app per day. Like OpenFeint, they typically showcase games, but are not limited to that genre. Sometimes they’ll have utility apps that are not game based at all. The design of this site is actually very similar to OpenFeint, which kind of makes me wonder if they’re done by the same person. Regardless, the apps are different between the two, which makes both of them worth checking out. 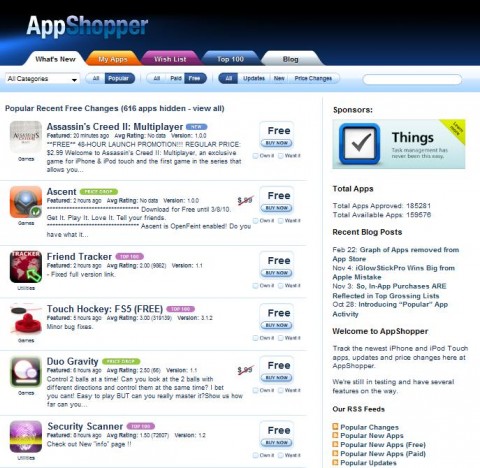 Appshopper is an all around site that will show both paid and free apps along with reviews for sponsored apps. While most review sites try to push paid apps to consumers, the free app filter on Appshopper is pretty awesome. Their listings show you all of the most recent and popular free apps, noting ones with price drops in the description.

5 thoughts on “The Best Sites For Quality Free Apps”