UCLA provides a limited number of student housing options for all of it’s students.Â  For grad students specifically, the housing is done by lottery and the priority deadline for submitting your housing application is today, May 6th.Â  At first I was really only considering living off campus in Brentwood, because I had heard great things about the area.Â  However, the idea of having an apartment ready before I arrive was something that sounded pleasant to me.Â  During admit weekend, I had heard a number of horror stories about students arriving late, without a place to stay, and spending thousands of dollars living in a hotel before they finally settled down.Â  If you refer to the resource links below and click on “virtual tour and floor plan,” you can see that all the locations are pretty nice.Â  Because I think these units are sufficient, using student housing would also save me the cost and trouble of flying out to LA and scoping out a place.Â  Anyway, I haven’t fully decided where I want to live, but I definitely would like to have the option of living in the student housing locations. 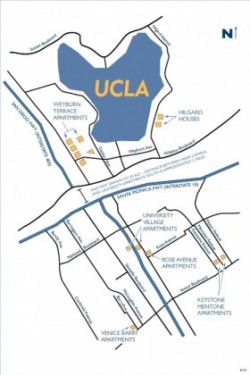 Weyburn Terrace
Hilgard
Keystone
Rose Avenue
Venice
University Village – (Since I am not coming with a spouse or domestic partner, this option isn’t relevant to me)

I think this is very important for any person undergoing his or her first year of an MBA.Â  I’ve heard from alumni that you’ll be spending most of your first two quarters on campus doing either homework, group projects, networking or recruiting events.Â  Because of this, I don’t want my distance to hinder my participation in any of these events.Â  Two of the options are very close and within walking distance: Weyburn Terrace and Hilgard.Â  And as you can tell from the map, the remaining options are a bit farther.Â  I would say the next best one in terms of proximity would be Keystone because that location has shuttle service and apparently Rose Avenue does not.

During my second year, I assume proximity won’t be as important, as a lot of students are doing study abroad and overall people are a bit more independent.Â  I may consider moving further out after my first year.

2.Â  Get an MBA Roommate

I think having a fellow Anderson student as a roommate would be a great plus to my overall MBA experience.Â  Living with a classmate can provide support and comfort because you are both going through the same challenges.Â  Since there’s so much going on, he or she could act as a point of contact to get you in touch with things you might otherwise not know about.Â  Additionally, in one of my previous roommate arrangements, we helped each other out in terms of conducting practice interviews with each other.

Having a roommate also reduces the cost of living by a significant amount.Â  As I’m starting to feel the weight of the debt load I’m about to take on, this is definitely something I’m taking into consideration.

Maybe I’m already getting old, but when it comes to roommate living, I’d best describe myself as “lacking drama.”Â  I don’t drink or smoke.Â  I don’t stay up and make noise really late at night.Â  I try to be very neat.Â  I’m not saying my roommate has to have exactly my standards, I just don’t want any major roommate disputes arising during my first year, while I’m finishing up my core and looking for an internship.Â  Every roommate I’ve had before has been pretty reasonable, (and they’ve all been tech geeks like me)Â but I’ve had many a friend with stories of roommates from hell.Â  Let’s hope I’m still lucky this time around.Â  😉

I’m going to list Weyburn and Hilgard as my top two choices, and then have Keystone as my third.Â  Both Weyburn and Hilgard both also happen to have furnishing options, which can reduce some of the moving-in headache during the fall.Â  I’ll make sure to get my application in by the priority deadline to increase my chances of getting at least an offer of some sort.Â  The non refundable fee is $30, so I think it’s worth a shot.

If Weyburn Terrace or Hilgard do not work out, I’ll consider trying to get my own apartment and live in Brentwood.Â  In fact, if I decide to get a roommate, particularly one from Anderson, Brentwood might even be the better choice.Â  I’ve heard that it’s rare for someone in Weyburn to get a roommate within their sameÂ concentration.

In terms of roommate, I may wait until a good amount of the offers are out before I begin reaching out to people.Â  Assuming I eventually get in, I’ll reach out to other Anderson students who have gotten in and, if I find someone compatible and accepted to the same complex, the rules state that I can then send an additional request to the housing department to live in the same unit.

Picking housing options is really a shot in the dark, but if things turn out really bad, I’ll still have the option to move out next year, or even move out early after paying a termination fee.