UPDATE: For a chance to win free access to the Beat the GMAT Practice Questions, click here.

Well I never thought I’d be doing GMAT problems again, but I just couldnâ€™t turn down Beat the GMAT.

Today, Beat the GMAT is releasing an upgraded version of their practice question set.Â  The question count has increased to more than 700 total questions, each with a detailed video explanation, and the product now includes a ton of new features that make it an even better deal.

Below is the promotional information that was submitted for release:

Just to give you all some background and disclosure, a few months ago, David Park the CEO of Beat the GMAT, reached out to me and offered a free subscription to the original BTG Practice Question Set.Â  He had come across my blog and knew I was studying for the GMAT. Â The BTG Question Set became an integral part of my studying and I subsequently scored a 750 on the test.Â  You can read my review of the previous version of the product here.Â  I was asked to do another review of the product based on a number of enhancements they made.Â  For writing this review, I’ll be given a handful of free practice question subscriptions, all of which I will distribute to readers of this blog.

First off, letâ€™s talk about the new features.Â  The changes made have definitely improved the overall experience and theyâ€™ve even addressed a number of the criticisms I had before.

One of my criticisms of the previous version was that it required a significant amount of self study before you could really use the product to its full potential.Â  It didnâ€™t make sense to get tested on a 750 math question if you were just beginning your studies.Â  But now with the inclusion of both difficulty sliders and subject choice, the product is instantly accessible to all potential users of this product, regardless of how far youâ€™ve progressed.

Say I’m a just starting my GMAT preparation and I’ve only just finished my Official Guide questions on modifiers for Sentence Correction, scoring somewhat poorly on the section.Â  (Trust me, Iâ€™ve been there)Â  If I had the BTG practice question set, I could immediately start up a custom practice set, with only 400-550 level questions for just the â€œmodifiersâ€ topic in Sentence Correction. 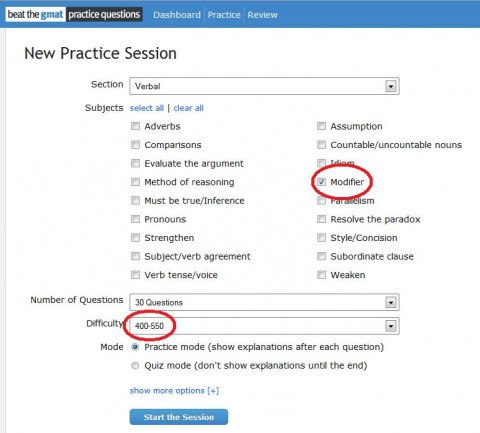 Or maybe Iâ€™m further along and already scoring in the 95th percentile for Verbal.Â  In that case, I would set my custom session to only show 700+ level questions with random topics and question types to simulate the exam.Â  The ability to customize difficulty settings and subject content are easily my favorite addition to the BTG Practice Question Set.

Another issue I had with the product before was the fact that I couldnâ€™t tell how hard a question was really supposed to be.Â  For example, if I got a math question incorrect, I could only see the benchmark for all the users around the world.Â  While itâ€™s nice to compare myself to all the GMAT takers in India and China, what I really want to know is whether I blew a 500 level question or a 750 level question.Â  The BTG Question set now shows you the difficulty level of the question right after you answer it.Â  No more using the â€œinternational students do well in mathâ€ excuse â€“ youâ€™ll know which questions you shouldâ€™ve gotten right.

One of the things I loved to do with the old practice set was run through a ton of math problems online. Â During my last week of studying, I was completing at least half a CAT exam, approximately 40 questions, every day. Â I did this to build endurance and try to simulate test conditions.

I think this feature highlights what is really great about this product: the ability tailor to your specific requirements.Â  Whether itâ€™s a 10 minute session during a lunch break or a 3-hour romp to simulate the actual GMAT, this product can be easily customized to fit a wide range of studying needs.

The New Beat the GMAT Practice Question Set is a huge improvement to an already great product.Â  I say already great because at the end of the day, the excellent video explanations, which were present before, are still what steal the show.Â  Iâ€™ve always felt that any practice question is only truly useful if you fully understand how to solve the problem the next time.Â  The video explanations provide that and Iâ€™ve found no other online resource that does as good a job, save for getting an online tutor or taking a GMAT course. Â The good news here is that with this new release, there are now even more video explanations â€“ nearly twice as much before.Â  Itâ€™s almost like having your own tutor or taking a GMAT course by yourself at your own pace.

And the addictive aspect of the product, primarily the fact that you can benchmark yourself with other users, is enhanced with the more detailed difficulty and subject modifiers.Â  If I were to add one wish list item to the product, it would be social media controls.Â  While itâ€™s great to compete against users all around the world, I think Iâ€™d be even more motivated to do well if I knew my results would be posted against my Facebook friends.

If youâ€™re starting out on your studies, I would definitely give these questions a try.Â  Not only is there a trial version, but they also have a 30 day money back guarantee if you are unsatisfied.Â  I scored a 750 on my GMAT using the original question set â€“ given all the upgrades that have been made, had I used the new version, maybe I could have scored even higher.Â  😉