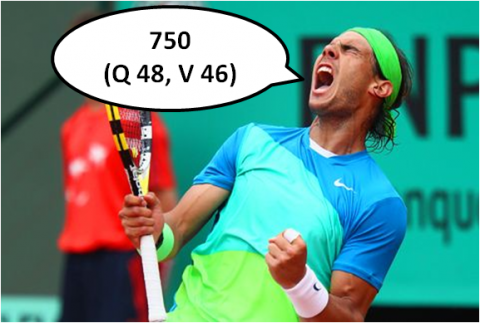 First and foremost, I have to give thanks to a number of people:

The Beat the GMAT Community – I first came across Beat the GMAT by following their Twitter account.Â  As many of you may already know, they tweet forum posts of members who have recently taken the GMAT, both successes and failures.Â  Seeing how people planned out their studies encouraged me to create my own GMAT plan and start studying myself.Â  Seeing those results also helped me maintain faith that my goals were achievable.Â  I’ve lurked in their forums for many months and only started posting recently, but I’ll definitely get my full GMAT debrief up there soon.

David Park, CEO of Beat the GMAT – David reached out to me and gave me complimentary access to the Beat the GMAT Practice Question Set.Â  Those questions ended up being a significant part of my study plan and definitely contributed to my 750 score.Â  My review of the BTG questions can be found here.

Manhattan GMAT – For their excellent online course.Â  I paid $1000 to take it and it was worth every penny.Â  They have great instructors and the best Sentence Correction guide out there.Â  (see my verbal score above)

My Brother – He encouraged me to reach higher.Â  I did so.

All Readers and Well Wishers to this Blog – Though it may seem trivial, all the comments and personal notes I received helped me get through my most difficult periods of studying.Â  Preparing for the GMAT can be a very lonely and intimidating experience, but having the support of a web community definitely makes it easier.

And just to give you a quick summary of my test experience (as I want to invest some more time in my official debrief) the day could not have started out worse.Â  I only got four hours of sleep the night before.Â  When I woke up my back and neck were sore.Â  And as I walked out the door, I had a nosebleed.Â  I overcame all those preliminary issues (with the help of a 5-Hour Energy), and did the essays just fine.Â  No trouble with either topic.Â  But when I got to the math section, I’m pretty sure I screwed up on the second question.Â  That left a sour taste in my mouth for the duration of that section.Â  The verbal section was okay, but I definitely had to guess on at least 4-5 questions that really stumped me.Â  I was certain that I did worse than my previous verbal CATs because I usually only have to guess on one or two.Â  By the time I got to the end section, where you enter demographic information about yourself, I was already thinking about my study plan for retaking the GMAT in a month.Â  I confirmed the reporting of my scores and almost fell out of my seat when the 750 came out.Â  My target score, the one that would keep from ever taking this test again, was only 720.Â  Initially, I had wanted to get above the 80th percentile for both sections, but I could live without doing so on Math.Â  With the Q 48 score I just barely eeked past the 80th percentile benchmark.Â  I wanted to shout wildly as if I had won the Superbowl, but I was so shocked and had so little energy left that I couldn’t muster up the strength.Â  (Plus there were people taking tests around me and I didn’t want to disturb them)Â  My whole body was shaking as I walked back to my car.Â  I kept looking back at my score report to make sure I had read it correctly.Â  During my one hour ride back home, I was shamelessly rocking out to every single song on the radio.

There’s a part of me that still can’t believe it’s all over.Â  Three months of my life and it paid off.Â  Wow.Â  This weekend my plans are to:

And for you non-tennis fans, the above picture was Rafael Nadal when he won the 2010 French Open, after he had gone an entire year without a championship, and regained the World’s Number One ranking.

22 thoughts on “Took the GMAT Today…”