I read an article this week on MSNBC called “Gen Y: No jobs, lots of loans, grim future” and it two effects on me:Â  First, it gave me chills by reminding me how depressing it was to be unemployed.Â  And secondly, it made me thankful for the job I currently have. 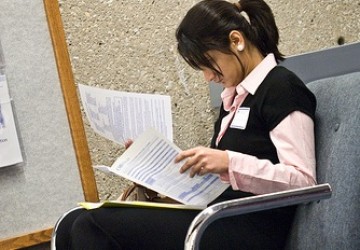 It was only a little more than a year ago that I was collecting checks from the government because I had no income of my own.Â  Now, I know my unemployment story is a bit brighter than others – I was only technically unemployed for about a month because I eventuallyÂ started doing my own consulting work.Â  I was, however, dropped from my group plan and had to work really hard to make my COBRA payments.Â  I was alsoÂ fairly ill at the time, and this only put more pressure on me to get on a group health insurance plan.

The MSNBC article highlighted the story of one man in Denver, who spent over $100,000 on his undergraduate degree and his MBA.Â  He’s now currently still looking for a job.Â  In one of his attempts to find a job just to get by, he was told that he was overqualified and should take both of his degrees off his resume.Â  He responded by saying,

â€œItâ€™s a personal thing for a couple of us and a bit prideful, but the idea we just spent five yearsÂ – and a hundred thousand dollars for some of usÂ – obtaining two degrees, to go ahead and wipe that right back off our resume in hopes of getting a $12-an-hour job at Starbucks would really be depressing.â€

This was somewhat profound for me since I will be taking the same risk when I go to business school.Â  Given, I’ll probably only go if I get into a top tier school and I probably have stronger than average work experience, I still worry about being put in that situation:

Having tons of student loan debt and no job to show for it.

The potential negative outcomes of getting an MBA are definitely scary and very real.Â Â Despite all this worry, my resolve to apply this fall is still unwaivering.Â  I know I have to take this risk if I ever want to be happy with my career.Â  As JFK once said, “Only those who dare to fail greatly can ever achieve greatly.”

1 thought on “Unemployment: A Reminder of My Past, A Risk for My Future”