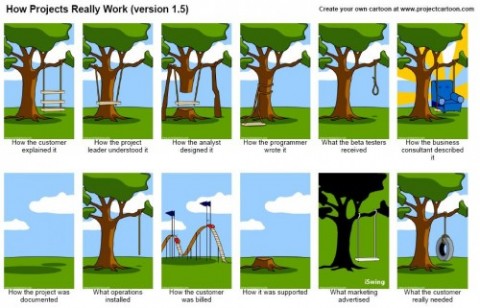 Most people who work in consulting have seen the cartoon above being related to both project management and consulting work in general. The picture comes from projectcartoon.com, which even has a feature that lets you create your own swingset analogy cartoon. Besides being extremely funny, the cartoon does illustrate a number of the unfortunate realities you face in the consulting world.

Consultants hate doing documentation. The problem is that by the time you get to this phase of the project, you’re already thinking about your next client and prepping for that engagement. This is why so many consultants fail in this area. The kicker, however, is that documentation really doesn’t take that much time. If you’re running towards the end of a project, put in those extra few hours to polish your work and leave adequate documentation. It’s a small investment that will make a world of difference for your client.

After a long project, it’s always fun to compare your original statement of work to the final deliverable given to the client. It is definitely amazing how much a project changes over the course of just a few months. This goes to show that we consultants really don’t know what we’re doing and are just trying to figure it out as we go along.

I can’t even count how many projects I’ve been on where, I’ve acted as the messenger, running between departments who are too busy to talk to one another. If you condense the components of a typical project portrayed above, you really just have a customer (non-technical) and a developer (very technical). Looking within any organization, you’ll find that the two groups simply don’t get along. They don’t like each other, they don’t understand each others needs, and thus, they don’t talk to one another. The fact that businesses simply can’t communicate internally is the key reason consulting services exist.

2 thoughts on “The Consulting Swingset Analogy”